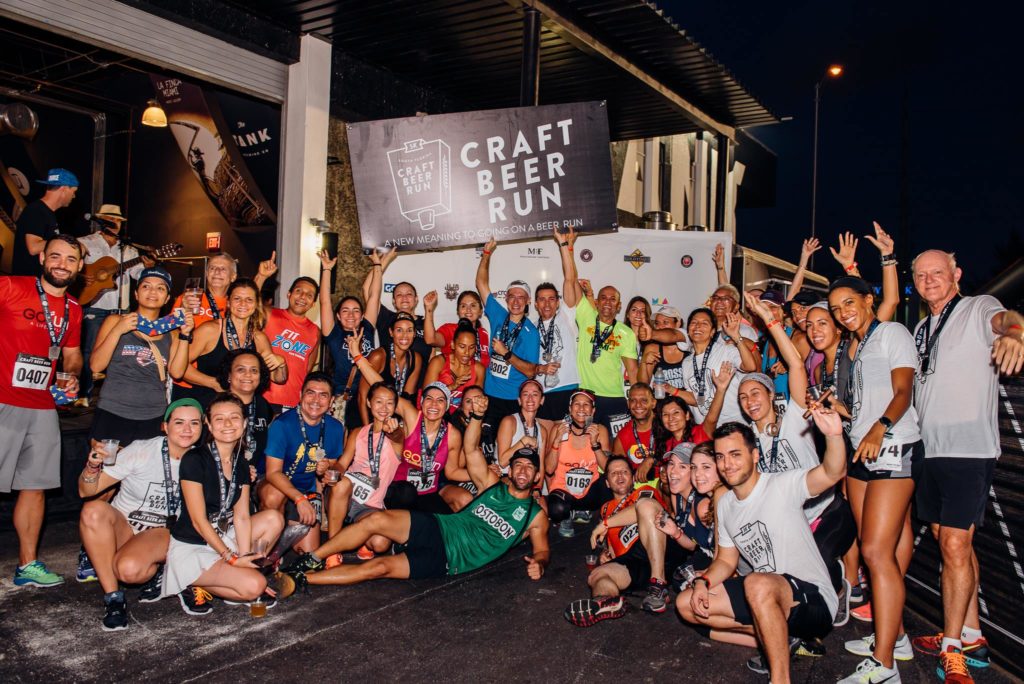 It’s not often you mix the ingredients of a 5K race with food and, most importantly, craft beer. For Tank Brewing Co., that recipe made for a fun evening as more than 500 racers and craft beer enthusiasts joined together after the event for music, beer sampling, and, of course, more beer.

Interesting characters from all over Miami came together on Saturday for the South Florida Craft Beer 5K, to race, have fun and support a good cause. All net proceeds benefited two nonprofits: Amigos for Kids, an organization dedicated to child abuse prevention; and Live Like Bella Foundation, which supports childhood cancer research.

Runner Haidar Hachem, sporting nothing but a pink pig beanie on his head and bright pink Speedo, was all smiles with his girlfriend, Marilyn Drozco, before and after the race.

Fittingly, the couple met during the Miami half-marathon in January during cold and terrible running conditions. Even in 50-degree weather, Hachem was still wearing the same outfit or lack of, that he had on Saturday. Drozco remembers wanting to quit, but Hachem, a Type One diabetic and cancer survivor, started pushing her — a woman he’d never met — to finish the race.

“I’m like what the heck?” Drozco said. “If this naked man has run 12 miles wearing what he has on, I can’t stop. So I finished the race and we ended up finding each other on social media after.”

“The outfit started back in 2013 when I was just a pig,” Hachem said. “I eventually met a friend in Melbourne who always wore Speedos during races, so one day I jumped the ship, starting wearing Speedos and never looked back.”

Recently, Hachem ran for 24 straight hours and 75 miles to raise money for the St. Jude’s Children Hospital, although Drozco still calls him the naked man.

Ethan Clary and Kyle Graves finished the race first and second out of all the participants. The best part for them is they’re also best friends who entered together.

“I’ve been training with Ethan since I came down to Miami two years ago, and the event here has been pretty amazing,” Graves said. “I always enjoy a nice little beer after the race to celebrate with friends, and the craft beer selection is something I’m not used to.”

Clary, who runs semi-professionally, wasn’t surprised he won and said he was even planning to go for another five-mile run after the race.

The race wasn’t all craft beer enthusiasts and semiprofessional runners. It was a family affair, as relatives of the racers cheered them on and were able to play games with their kids inside Tank Brewing Co., 5100 NW 72nd Ave.

Dan Unke planned to race solo, but with his wife sick, he brought their four children along with him to race, with two of them riding shotgun in their single stroller and the other two running alongside him.

“The craft beer is what got my attention,” Unke said. “We may not make good time, but we’re here for a good cause and some fun.”

After they went through the finish line, Unke and his four small children, excitement on their faces, put their hands in the air and exclaimed, “We did it!”

The race was possible thanks to Carlos Padron, owner of Tank Brewing Co., and Frankie Ruiz, co-founder of the Miami Marathon.

Padron and Ruiz were students at Belen Jesuit Preparatory School and ran track under coach Carlos Barquin. That connection helped them to come together and make this Craft Beer Run happen.

“It’s a great event to unite the community and this city,” Padron said. “All of the craft beer guys are proud to make a little dent in the craft beer world that is new to Miami and this is a good way to get it going and have this event that continues year after year.”

The craft beer was one of the main reasons people were attracted to the event.

University of Miami Marine Science graduate students Marybeth Arcadia, Kayleen Mcmonigal and Kurt Hansen still run as a hobby about once a month during school, but it was the beer that certainly got their attention.

“I found out about this event after getting an email sent out by the Brickell Run Club,” Arcadia said. “Honestly, it said beer in the subject title so that was it, I’m there.”

Other runners, such as Jim Fox and Nurys Eduardo, are used to a great beer selection, as their hometown in Grand Rapids, Michigan, is base to more than 30 breweries.

“We try and do a run every week, so it’s more of a hobby and fitness with us,” Fox said. “But of course the beer is the best part, I’ve never seen anything like this.”

Thanks to Hurricane Irma, there were questions about attendance and how big an event this could actually be. Seventy five runners signed up a week before the race and 250 the day before, but on Saturday 500 showed up.

“Everyone thought Carlos was nuts that he wanted to get the whole beer community together, but obviously he pulled it off,” said Louis CasaMayor, owner of Republica, the advertising agency that teamed with Tank Brewing Co. “I get chills just thinking about it and I’m super proud of him.”