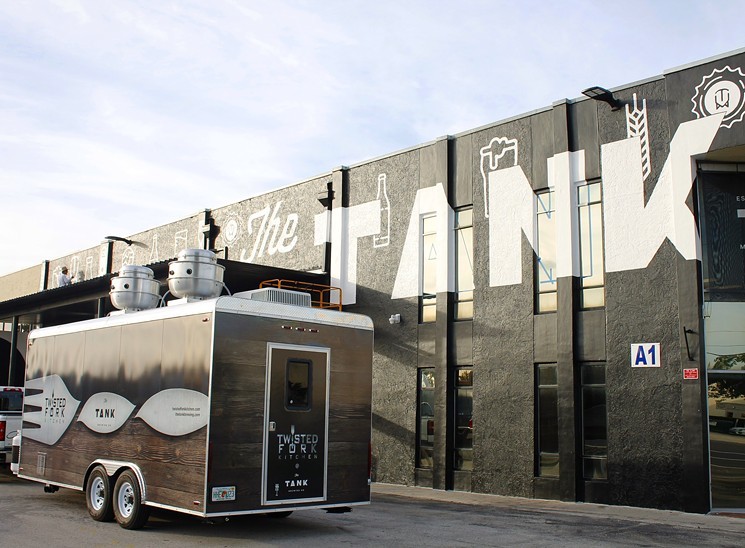 The Tank Brewing Co. taproom opened this week, making the craft brewery the latest in Miami to pour beers onsite for the public.

The announcement was made on the brewery’s social media, which invited the public to an informal “sip and discuss” event and preview to mark the occasion. Owner Carlos Padron says he opened the taproom following a week of inviting test crowds of various sizes.

The debut comes a week after he obtained the taproom’s final permit and a year after the Tank began distributing its beers with Doral-based Gold Coast Beverage Distributors.

Padron credits the bars and restaurants that have carried and promoted his beer with helping to build the brand and draw attention to the brewery, located in an unincorporated industrial space near Miami International Airport.

The brewery measures a whopping 25,000 square feet, with 7,500 square feet for the brewing area alone. Padron estimates the taproom to be at least 4,000 square feet. He says it’s “huge” — holding up to 600 people, with seating for 120 — and has a “relaxed mood.” A soon-to-open cigar lounge, adjacent to the taproom, will offer various high-end cigars Padron has been associated with, including Rocky Patels, Alec Bradleys and a line of Plasencias. There’s something for everyone, Padron says, including board games.

He says he hasn’t yet received the permit to open the lounge but expects to receive it within the next week.

“It’s a big space to fill, but the good thing is that we’ve had crowds of 30 and crowds of 100, and they’ve all felt comfortable,” Padron says. “There’s space for every age group and every person.”

Inside the taproom is a bar that features 16 beers on tap (including guest brews) and seats at least 20. Padron hired and trained several staff members, sales managers, and a new brewer.

Moh Saade, The Tank’s brewer, has a background in brewing abbey-style ales and has helped develop the Tank’s core brands, including La Finca, a Belgian wheat saison; Freedom Tower, an amber ale; and El Farito, an American IPA. Matthew Weintraub is the head brewer.

Beyond the warehouse-size taproom is the brewery, housing the brewing system and several fermentation tanks, which can be viewed through glass windows. Padron says he expects the brewery’s capacity to double once eight new tanks arrive. They can hold up to 60, 30, or 15 barrels of beer each.

Several events will celebrate the launch of the taproom. Expect an official grand opening April 28, a VIP and media event May 4, and a thank-you party, with live music, beers, and a special menu, May 20.

10 Miami Chefs You Should Be Following on Instagram
The Tank Brewing Co. Has a New Tasting Room