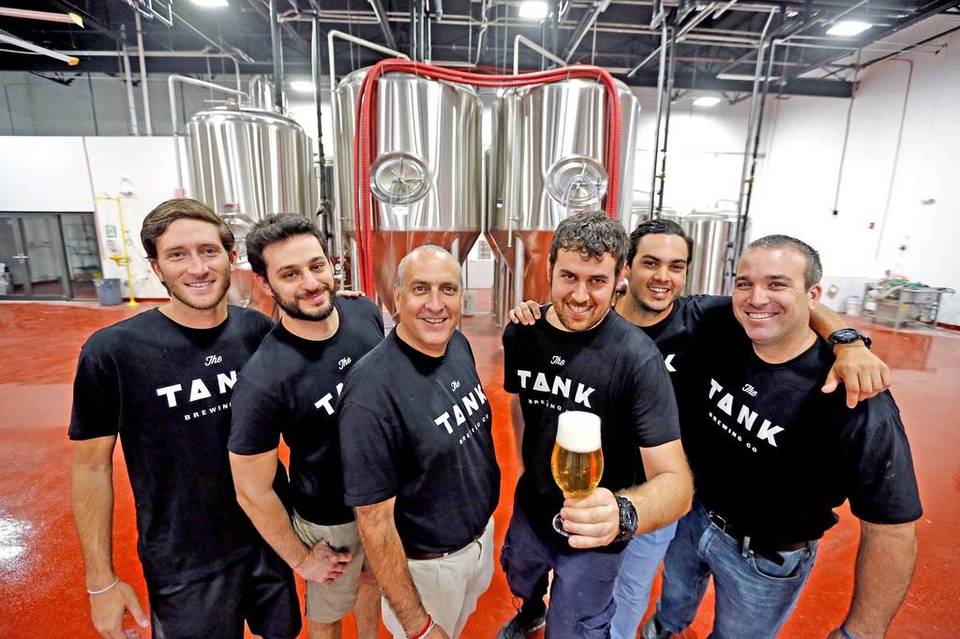 An orange Abraham Lincoln riding an old-timey bicycle peeks over rush-hour traffic on Bird Road and catches your eye from the east side of the Palmetto Expressway with one bold, mouthwatering word against the jet-black building: “Brewery.”

Down there, at the entrace to the Bird Road Arts District on Southwest 41st Street, the equal-part owners of Lincoln’s Beard Brewery sweat through their T-shirts amid wet paint and polyurethane vapors wafting through the open doors as they put the finishing touches on their shared dream.

“Miami’s neighborhood brew pub: That’s what we want to be,” said head brewer John Falco, one of six owners — most of them ex-military at Doral’s U.S. Southern Command — who are betting on beer. “This is my dream.”

Like Lincoln’s Beard, whose orange-and-yellow logo is newly visible above western Miami-Dade, lovers of craft beer — the buzzword for artisanal beer brewed locally in small batches — are moving west to chase that dream.

Three new breweries will come online west of Miami International Airport this year to brew beer in the communities where more Miamians are moving. They will join two in Doral, the third-fastest growing U.S. city: firmly established MIA Beer Company and Biscayne Bay Brewing, whose long-awaited tasting room where beers can be sampled as you would in a bar is set to open in east Doral in early May.

“The market is ready, and it’s growing,” said Jose Mallea, founder of Biscayne Bay, which has been brewing and distributing beer in Miami-Dade and Broward counties since setting up in Doral in September 2014.

Until now, Wynwood, where there are three breweries within a mile of one another, has been the place to be for beer. But as real-estate prices soar to more than $50 and $60 a square foot in that area, those interested in brewing in large, industrial spaces are looking to Doral, western Miami and Kendall, where rents can be as low as $8 to $12 a square foot.

Even Wynwood’s best-known breweries are looking to set up full-scale breweries outside of their neighborhood as they are squeezed by rents and space constraints.

J. Wakefield Brewing is looking to build a brewery for production only that would make it the largest south of Tampa’s Cigar City Brewing and twice as big as Oakland Park’s Funky Buddha Brewery — capable of brewing a massive 45,000-50,000 barrels of beer a year, founder Johnathan Wakefield said.

And Wynwood’s eponymous brewery, Wynwood Brewing, is looking to be brewing in a large-scale brewery by the end of next year. Their breweries in Wynwood will be more like storefronts where they can experiment with smaller batches of beer.

From Wynwood to the west, the golden beer rush is clearly well under way.

Each brewery has its own style and character, most with a tasting room that acts as a lounge. Food is often available through food trucks or, increasingly, in-house kitchens.

Dropped right between Miami Springs and Doral, The Tank Brewery’s beers will be available in local restaurants and bars in less than two weeks, said founder Carlos Padron, 50, whose day job of handling operations for the Plasencia Group’s cigar import and sales dovetails perfectly with his new endeavor.

The Tank’s tasting room, which is still a study in concrete dust and outlines of future bars on Milam Dairy Road just south of Southwest 58th Street, will have a cigar bar inside when it opens this summer.

Wedged between warehouses, The Tank and other breweries work to make their tasting rooms destinations.

Padron stole away head brewer Matthew Weintraub, 27, from Florida International University, where he was an adjunct professor in the hospitality school, teaching beer-making at the school’s state-of-the-art brew lab. Soon, they’ll be able to make more than 9,300 gallons of beer a month at the Tank.

“I just want people to enjoy the beer,” said Weintraub, whose first offering will be a saison, a so-called farmhouse style with a floral aroma and crisp finish like brut champagne.

Whereas some might see competition, local brewery owners have seen that more craft breweries helps educate non-beer drinkers and those who only know the mass-market, pale, yellow beers such as Budweiser, Heineken and Miller.

“I welcome it with open arms,” said MIA Beer founder Eddie Leon, whose taproom fills up nightly for happy hour with locals. “No two breweries are going to make the same beer, and each taproom provides a different experience. We all do something unique.”

Across from the Tamiami Airport in Kendall, Alberto Cespedes teamed up with two longtime friends, including Jaime Medina, an assistant brewer at Miami’s long-running Titanic Brewery in Coral Gables, to build Spanish Marie Brewing. The company expects to begin distributing its beers in July.

Spanish Marie, whose tasting room is expected to open in the fall, will have the feel of a hidden speakeasy, Cespedes said. He said he hopes it will become a local watering hole for Kendall residents who don’t want to travel to Wynwood or even Doral for quality, locally made beer.

“We want to cater to people who don’t want to drive an hour when they want to get a beer,” he said.

Lincoln’s Beard will brew only for its patrons in-house at its brewery under the bright orange sign visible from Bird Road. Proprietors envision a relaxed bar environment, with live music in the beer garden out back where locals can duck out of rush hour into happy hour. Kendall’s Tacos & Tattoos Mexican restaurant will have a permanent outpost at the brewery.

Florida craft breweries produce more than 35 million gallons of beer a year, according to the Brewers Association — enough to fill Lolita’s tank at the Seaquarium 70 times.

And now, craft-beer drinkers will have more options available in their own Miami neighborhoods.

“We want to integrate fully into the community,” Falco said.