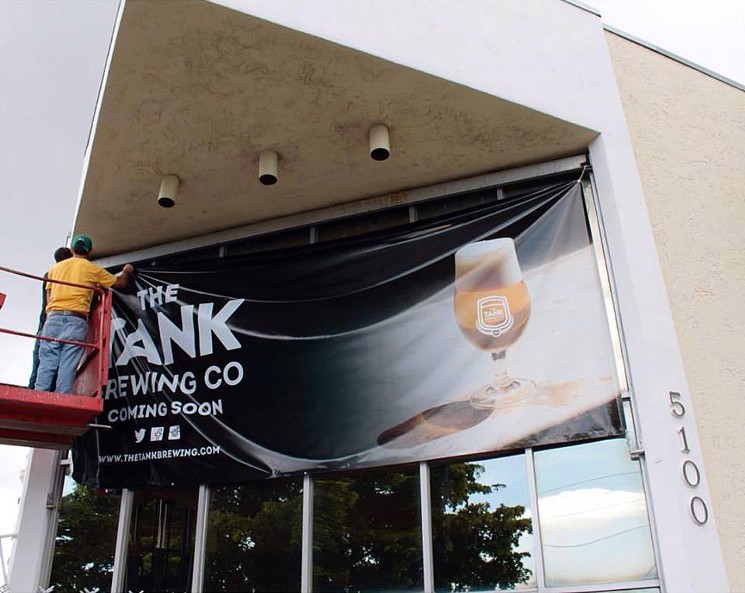 New Times last spoke with Tank brewmaster Matt Weintraub when he debuted Tank at this past February’s South Beach Wine & Food Festival. Now the brewery has a place to call home. The facility is located slightly northwest of Miami International Airport, at 5100 NW 72nd Ave., in a slice of unincorporated Miami-Dade County that sits between Doral and Virginia Gardens.

The brewery is almost ready. In an interview with Miami’s Craft Commander last week, Weintraub said he hopes to have Tank open either by the end of this year or the beginning of 2016.

The relationship with cigars comes by way of Tank Brewing owner Carlos Padron, whose brewery also shares a space with his other business, Family Tobacco Traders. Before getting into craft beer, Padron was in the business of importing cigars from Central America.

At Tank, combining the two will come in the form of a cigar shop/lounge where guests can smoke a stogy while enjoying a small-batch beer made only several feet away. Minus the taproom and the cigar lounge, the brewhouse is roughly 10,000 square feet and includes extra space for a possible expansion.

Beer and cigars — it seems very Miami, but are they a perfect pair? It all depends upon the beer. Tank is going with flagship La Finca Miami saison. As Tank’s assistant brewer, Moh Saade, describes it, it’s a classic, single-strain saison made with a blend of grains and dry-hopped with German and American hops.

Marrying the sophistication of fine cigars with the craftiness of small-batch brews is part of keep craft beer evolving. “For craft beer to survive, it has to take a face, just like wine, in people’s minds,” Saade told Craft Commander. “Craft beer is not less than wine. It’s not a fad. It’s part of life.”

If you missed trying Tank’s beers at this year’s Grovetoberfest, they are still available on a limited basis. Tank is partnering with Seven Dials October 27 for a four-course beer dinner featuring its line of Belgian monastic-inspired beers. Tickets cost $75 per person. Reservations can be made by calling 786-542-1603 or emailing [email protected].