How to celebrate Oktoberfest, Miami style, at our local beer breweries 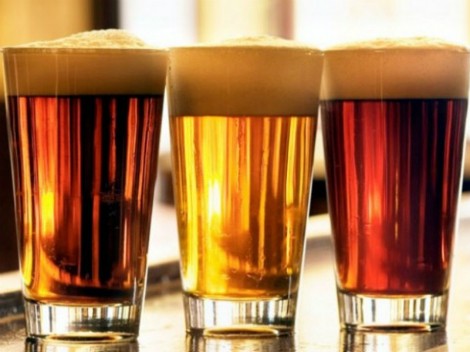 The craft brew scene is spilling over more than the head of a badly poured pint (don’t worry, that won’t happen at any of these places).
Locally brewed beer is as hot as a Miami summer. And as we approach all the Oktoberfest celebrations, you’re going to want to know where to enjoy them.
So here’s your ultimate guide, from the brewmasters and bartenders themselves, on their “Most Miami” brews — and where to find them.

Brewmaster Raymond Rigazzio at the Abbey recommends a pint of either their Abbey Immaculate IPA (6.2 percent alcohol by volume) or Abbey Hop Lab IPA which are their most popular beers.
“Both of these IPAs have juicy, tropical citrus flavors, which complement the warm humid weather here in South Florida,” he said. The Abbey is the oldest brewery on Miami Beach.

Delivering house-made brews at Titanic Brewery in Coral Gables. Photo: Pedro Portal/Miami.com
What the Abbey is to Miami Beach, Titanic to Coral Gables right near the University of Miami: an institution and a favorite hangout for locals. Your best bet here is the Triple Screw light ale, their lightest beer and the closest to having a summery taste. Brewed with imported pilsner malt and German hops, is a bit spicy with floral aroma and a dry, tart finish. Translation: it’s so Miami.

Biscayne Bay Brewing Company brews
Coming up on their one-year anniversary this month, Biscayne Bay Brewing in Doral keeps expanding its beer selection. If you had to choose one to represent the 305 it would be the Miami Pale Ale. The 5.5 percent American Pale Ale is described as a “moderate, refreshing ale with noticeable hop aroma balanced by supporting malt flavors.” It’s the perfect description for the way they like to brew beer, says Co-founder and President Jose Mallea. Miami Pale Ale is available at select Total Wine Stores and Whole Foods Markets.

The Tank Brewing is one of three breweries in western Miami opening this year. (Carlos Frías/The Miami Herald)
West Miami’s newest brewery, The Tank, features a non-descript exterior and a huge interior space with plenty of bar seats, tables for large groups and even a private event room. Named after one of Miami’s most recognizable landmarks, particularly to the Cuban community, their most Miami brew is the Freedom Tower Amber. The American amber ale combines a variety of malts, barley, plus cascade and galena hops and a house ale strain of yeast. That combination gives the 5.3 percent ABV brew a malty caramel flavor with hints of stone fruit.

Last snow illustration from Funky Buddha in Fort Lauderale. (Handout)
Yes, it’s in Fort Lauderdale but their craft brews can be found widely around Miami. They even have a couple of odes to Miami on their labels. On one of their most popular beers, Last Snow, the label features a coconut snowman on a front lawn with a Miami skyline backdrop. Their Nib Smuggler Chocolate Milk Porter features a cocoa cowboy which is a reference to the Cocaine Cowboys of the 1980s in Miami. However, their most Miami is the Pineapple Beach “a blonde ale with just a hint of pineapple for a very tropical vibe,” said John Linn, their brand director.

The newbies in the Miami brewing game are co-founders and partners Juan O’Naghten and John Cooper with their new brewery inside the Marlins Park Home Plate Garage. Their most Miami beer? Their pale ale, the 90 Mile, is an homage to the distance from Cuba to Florida, across the Florida straits.

“This collaborative beer was made to commemorate the brotherhood that started with our grandparents when they came to this country and still carries on today. At NightLife we are all about the story, and this one is ours,” said O’Naghten.

Of the two craft brews available year-round, the P. Swayze IPA (you might want to do some dirty dancing after drinking it) has peach and apricot notes making it ideal for our nearly year-round hot, sticky weather.

Concrete Beach taps.
This brewery offers craft beer lovers a covered area that flows out to their al fresco patio area. And the beer to have, says marketing manager Kathleen Barnes, is their FloridaFest. With Europils, Dark Munich, Melanoidin and Carapils malts, Hallertau and Tettnang Hops and toasted coconut, the 5.7 percent ABV beer is “a traditional Oktoberfest beer with a tropical twist,” said Barnes. “This copper-hued lager opens up with aromas of subtle coconut, followed by notes of toffee and vanilla. Undertones of toasted coconut and biscuit round out this smooth, medium-bodied beer.” FloridaFest is available at The Bend Liquor Lounge and at Wynwood’s Boxelder Craft Beer Market as well as Suviche and The Butcher Shop restaurants.

Another Wynwood brewery (yes, the hipster neighborhood is a brewery haven) J. Wakefield is where you’ll find an homage to Star Wars. That means you can drink their El Jefe Coconut Hefeweizen and tart Miami Madness sour (both have low 5.5 percent ABV) among likenesses of RD2D and Darth Vader. Brand Director Alex Gutierrez recommends El Jefe, “a traditional German Hefeweizen at its core, but with the addition of fresh coconut flakes for a taste of South Florida and its beautiful surrounding beaches.” Miami Madness “our world famous Florida Weisse brewed with guava, mango and passionfruit,” he said has been rated Best Berliner by BeerAdvocate.com and No. 2 in the world by RateBeer.com.

Wynwood’s newest brewery made a splash on the neighborhood with a huge inside beer garden that leads out to a large patio with plenty of communal seating. Here’s where they have DJs working the decks and the Baja Bao permanent food truck run by Pubbelly. As for the beer, pick the mango wheat, a golden-colored wheat ale fermented with ripe mangoes. It’s on the lighter side with 4.8 percent ABV.

Taps at Wynwood Brewing Co.
One of Wynwood’s veteran breweries, this place is for the serious craft beer drinker. Minimal décor, laid back atmosphere are the draw here. It’s all about their brews. Their La Rubia can be found at Publix, Total Wine and at lots of other breweries.

It’s their signature and most popular, an American blonde ale that General Manager Marcus Sussman says “has a perfect balance of bready and sweet flavors. La Rubia pairs excellent with seafood, chicken or salads.” La Rubia is widely available including area Publix and Target.